Home / City Magazine / How close we have come to being rich 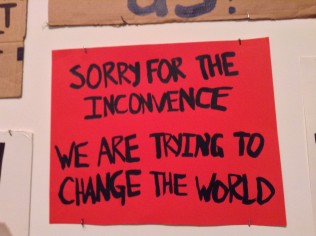 In a recent public forum at the College Art Association Annual Conference in Chicago, scholar/curator Bruce Barber compared the curator today to the hedge funds manager, whose goal in managing assetsis to reduce risk. The metaphor was intended as polemic to begin a critical examination of the complexity of the economic position of curators working in institutional structures today. What impressed me about his presentation was that in the act of critique, it affirmed the importance of expanding the dialogical possibilities of curating and curators’ constant self-questioning – curating could contribute toas well as fail art. While curating has consequences on art, curators could make choices that mitigate the consequences.

This essay aims to invite artists in Hong Kong who are skeptical of curating to give curating a chance. The skepticism may be a product of complex circumstances, but some doubts artists may have are well-founded. For instance, how many curators in Hong Kong do studio visits, spending long periods of time with artists to learn about their works as an end in itself, not for meeting exhibition deadlines? How and how much do curators speak critically in public about their reasons for working with some artists and not others, making choices informed not only by personal taste, but by artistic contribution, or accountability and ethical positions? The less such questions are discussed openly, the more rigid the barriers of forging trust become. We end up not seeing each other as whole persons in a peer community. This would definitely fail art. 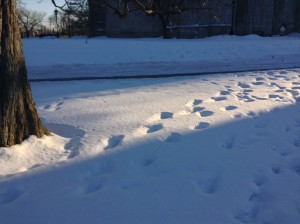 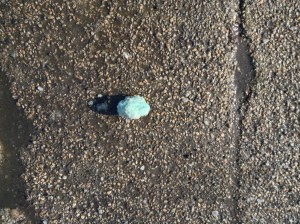 Stepping back from how curating has unfolded in the contemporary world, in order that historical reality does not limit our imagination of ideals, I propose that curating is an activity of conferring value upon objects of art – objects in all facets of the term, from bounded physical entities to spatially, temporally, socially, and technologically mediated systems that are generative, site-specific, and open. They are chosen and gathered in specific ways as objects for attention and contemplation in such settings as exhibitions, projects, events etc., where their specific values in relation to each other are attended to. Atthe same time, curating is also an activity of conferring value upon art in general. To choose to curate artis to regard art as a good to pursue; to curate well is to bring about the good of art, in its specificity and generality.

While curating is commonly seen as the individual expression of a curator, I see it also as the expression of the curator’s submission to the force of the disparate objects of art made by other individuals – the artists. To curate is to find ways to let her own and others’ ideas sound out each other. This encounter is productive by enabling a nexus in which the value of each other in a certain public realm (varying between the chosen forms of presentation) could be deliberated. I have recently encountered two exhibitions in the US, in which specific curatorial gestures encourage different ways of thinking about the exhibits and art in general. They are telling as to how curating could indeed be an activity of valuing art,and failing it. 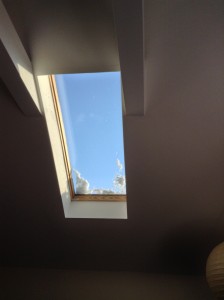 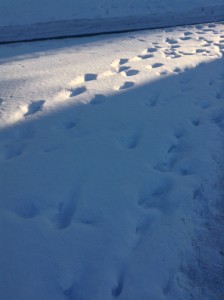 The official narrative of The Way of the Shovel: Art as Archaeology, presented by the Museum ofContemporary Art Chicago, is that it questions history and its truthfulness. The shovel is presented literally, as artists dig and excavate and as their works address such labour. The shovel is also metaphorical in that it returns art to the matters and materials that come before it as ‘art work’. The curator and artists make it clear in the audio tour (http://shifting-grounds.net/exhibition.html) that theyare not doing scientific archaeology, and there are differences between what artists do and what archeologists do in relation to history. My problem with the exhibition is whether the way the materialsare presented live up to what it intends. For instance, accompanying the photographic work of Jason Lazarus entitled “Above Sigmund Freud’s couch” is a caption that says, “the artist ‘excavates‘ the ceiling” (above Freud’s consultation couch) in what is “probably the most revered excavation site in thehistory of psychoanalysis.” Not only does the caption compete with the title of the work by being repetitive of it, but it also risks adding an unnecessary dimension of popularism to the interpretation of an ambiguous and complex image that conjures up a mixture of noise, anxiety, solitude, power, anddesire, which has nothing to do with the sentiment of reverence to an excavation site. It is possible the curation intends to make us complicit of the gaze of many, but to what effect? what does this shared act of looking make us, and make the act of the artist looking? Guidance along this line of thinking is not tobe found. Instead, along this exhibit and some others, captions tell visitors to listen with their mobile phones to the narratives of psychoanalysts and archaeologists on the particular object on display and its context. Surely, to include experts’ opinions is to encourage understanding. But what kind ofunderstanding? If artists know in ways that are different from how archaeologists know, what does thiskind of disciplinary narratives introduced as explanation of the art do to the art? While the curation draws on established disciplines to explain itself, as if its loyalty to them needs no questioning, there is no concomitant acknowledgement of the specificity of the artists’ contribution in ways of knowing, or un-knowing. This treatment of the artists’ ideas risks neutralizing art into a set of didactic narratives that tell us how we should make of them. The original intent of acknowledging artists’ ways of working with history becomes subordinated to what is already established as legitimate and taken-for-granted ways of working with history.

On the contrary, Live Archive, coincidentally also by Jason Lazarus at the Contemporary Jewish Museumin San Francisco offers a different kind of curatorial gesture. It creates more open parameters and exertsmore challenging demands on viewers to consider the exhibits. The exhibition begins with an installation entitled ‘5/19/12 2012, Glow-in-the-dark tape’. The caption offers a story of how the tapes were‘salvaged’ from a dark room that is now closed. The caption ends by saying, “As way-finders for both the students and the medium, these sections of tape suggest new directions in practice and pedagogy delineated by the loss of the tape’s usefulness. The skillful attentiveness required in the darkroom has been largely replaced by the ubiquity of digital photography, and the effects on the future of artistic production are still the subject of speculation.” The tapes are obsolescent; but the meaning of what is rendered obsolescent in the way history unfolds itself is kept uncertain and open. 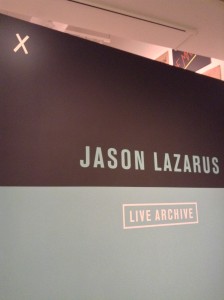 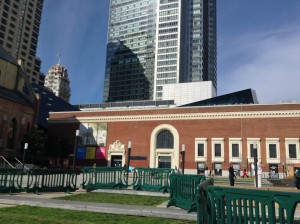 To find the way-finder, one must look all the way up towards the uppermost corner of the wall; two,roughly six-inch tapes are placed in the sign of multiplification. Then, making a sharp turn into a differentcorner, one is greeted by three walls full of emotionally-charged protest signs made in artist-ledworkshops in response to Occupy Wall Street in 2011. Among them are “I’M NOT A ‘HUMANRESOURCE’. I AM A ‘HUMAN BEING’.”, “SORRY FOR THE INCONVENIENCE. WE ARE TRYING TO CHANGE THE WORLD.” Together, the poignancy of the tapes at the first corner and the deafening silence of the protest signs in the next conjure up a moment that compels our reflection on the agency of our subjectivity and its limits in the world we live. 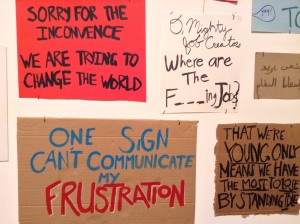 In the same exhibition, a blanket-wrapped red-brown object, with black gaffer taped horizontally and vertically across it, is affixed to the wall. It is entitled Untitled (New Orleans) 2011. The caption, written in the first-person narrative, tells of how Lazarus found the board of dated African American photos fixed to it in a junk shop. According to the shop, he says, it was salvaged post-Katrina. The artist bought the Board, so “the shop wrapped and taped it up.” The exhibit is shown the way it “left the merchant’s arms”. No photograph is shown, but there are as many as one could imagine. 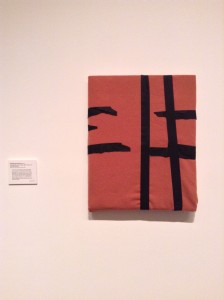 There could be incessant debates on whether any single object in this exhibition, considered in isolation,is art at all. No claim has certainly been made either way. But in where and how the exhibits are placed in relation to how the gallery space unfolds and in relation to each other, their historical references are addressed but also suspended, to free up the possibilities of a different set of politics and aesthetics where they are. Lazarus treats the exhibition as “processes of learning” that take place between the artist and others. The ambiguity and tension in meaning are kept open for pondering. In this curation, the artist’s personal memory does not become an authority by first-hand testimony. Rather, it is sensual and fragile, and becomes a powerful critique of modern systems of preserving memory, an insight shared by Pierre Nora. Elsewhere, I have discussed his ideas from the essay “Between Memory and History: Les Lieux de Mémoire”1. For the purpose here, I would reiterate how he questions modern systems of memory preservation (museums, archives, monuments, etc.) for being sites of remains that deritualize our world. 2 While common responses to this misplaced politics is to present memories as objects of individual possession, Nora argues instead that it is the activity of remembering as lived experience that is at issue. To care for sites of memory is to care for remembering that is “at once immediately available concrete sensual experience and susceptible to the most abstract elaboration”3 (my emphasis). The question for the problem of memory is then shifted from what to remember to how to remember. As an example, Nora cites the observance of a commemorative minute of silence, a “concentrated appeal to memory by literally breaking a temporal continuity.”4 Lazarus’ Live Archive resonates. It calls for minutesof silence that are also dynamic sites for remembering. The artist’s process of thinking and questioning is an integral part of the exhibition, opened up as a series of choices made in the curation: what to controland what to let go of, who is involved and how etc. These choices all play a vital role in conferring value upon objects of human life. The way they are makes the exhibition – a temporary intervention in life -meaningful.

Ellen Pau’s The Great Movement @ Edouard Malingue Gallery – Heat is its currency, coldness its baseline; to slump is its counter-ambition, to..

Approaching ‘seasickness’ again in Yet: A Solo Exhibition by Chan Chik Yee @ Casphalt (till Jan 5) – Do things refer to particular sensations,..